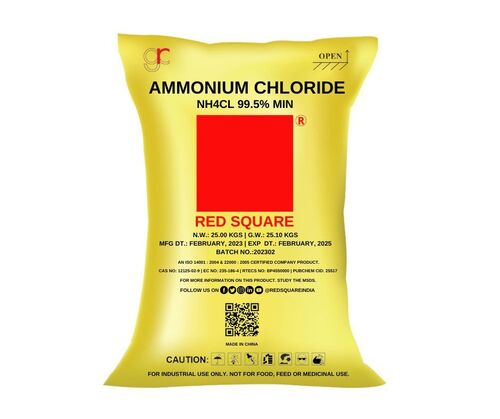 Pharma Grade - Ammonium Chloride is a systemic and urinary acidifying salt. It helps maintain pH and exerts amild diuretic effect. This acid forming salt also exerts an expectorant effect by irritating the mucous membranes and is used for alleviation of cough.

Food GradeÃ¢â‚¬Å¡ - From liquorice and salmiac pastilles to chewing gum, ammonium chloride serves as excellent flavour-agent. As a matter of course, only purest ingredients might be used for delicious sweets. Also as food additive underthe E number E510,working as a yeast nutrient in breadmaking and as an acidifier. It is also used to improve the crispness of snacks such as samosas and jalebi & in baking to give cookies a very crisp texture.

Feed GradeÃ¢â‚¬Å¡ - Ammonium Chloride Feed Grade serves as feed additive for various feed stocks such as cows, lambs and pets like cat and dogs. It has a positive effect on the prevention of urinary calculi and therefore improvesthe welfare and performance of these animals significantly. It also provide protein to livestock.

Fertilizer Grade - Ammonium Chloride contains 25% Nitrogen. The entire nitrogen is present in ammoniacal form. Besides nitrogen, chlorine present in ammonium chloride is also an important micro nutrient. It improves root formation and ensures quality product output. When ammonium chloride is applied as basal or top dressing for cultivated crops,loss of nitrogen is very less. Consequently more nitrogen will be utilised bythe crop, thereby fertilizer use efficiency is increased. Ammonium Chloride fertilizer application is recommended for saline and alkaline soils. It is also a suitable nitrogenous fertilizer for application in low lying areas where paddy and other crops are cultivated by farmers. It is less hygroscopic than other fertilizer which means the fertilizer has a fairy long life in storage.The chloride radical in ammonium chloride frees Phosphorous, Potash, Magnesium,Silica, Iron, etc. from the soil.

Industry Grade - Ammonium Chloride is used in dry cell battery, flux, galvanizing, soldering, zinc refining, textile dyeing & printing, to luster cotton, leather tanning and many more industries. A principal use of ammonium chloride has been as a fluxing agent for hot dip galvanizing of steel and in the refining of zinc.It provides fluxing action by reacting with molten zinc to form a stable melt containing zinc chloride and ammonium chloride.